The Human Swarm, basis for Synthecracy 10 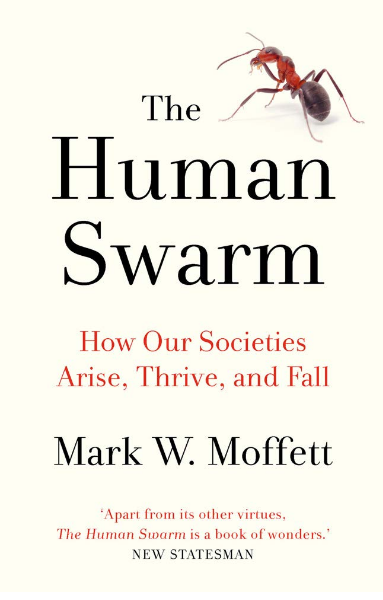 This book by the brilliant boundary spanner Mark W. Moffett is highly recommended. It came to my attention at the spectacular ICCS 2020  Complexity Conference (virtual this year) last week in July 2020, where Mark Moffett gave a wonderful lecture about what he has discovered in Nature and in human swarms. It is full of new insights and magic ! (counter-intuitive and unexpected).

I will post the video of Mark’s lecture here as soon as it is released to the general public by the organizers of the conference.

Here are reviews and impression of  readers:

The Human Swarm: How Our Societies Arise, Thrive, and Fall

“Fascinating… a delightfully accessible and ingenious series of lessons on humans and our societies.”―Kirkus Reviews, starred review

“[Moffett] intrigues by setting human societies in the context of those of the animal kingdom. This fine work should have broad appeal to anyone curious about human societies, which is basically everyone.”―Publishers Weekly, starred review

“A well-researched and richly detailed account of why societies have been a fundamental part of the human experience since our earliest ancestors. Highly recommended for fans of Jared Diamond’s Collapse: How Societies Choose To Fail or Succeed and Yuval Harari’s Sapiens: A Brief History of Humankind.”―Library Journal, starred review

“[An] enticing whirlwind tour of the fascinating patterns of behaviour and structures of societies revealed through the varied lives of people and animals across the globe.”―Nature

“Our times are filled with garage start-ups that become Silicon Valley behemoths overnight. Such scaling-up pales in comparison to humans going from hunter-gatherer bands to our globalized world in the blink of an evolutionary eye — and thus now, a stranger a continent away can be killed when we press a button operating a drone, or rescued when we press a button marked ‘Donate now.’ In The Human Swarm, Mark Moffett charts the science of this scaling up of human societies, and its unlikely evolutionary consequences. This highly readable book is ambitious in its interdisciplinary breadth, rigorous in its science, and deeply thought-provoking in its implications.”―Robert Sapolsky, author of Behave

“The Human Swarm is surely the most accurate, most comprehensive, most original explanation of our social existence that we’re ever likely to see, one jaw-dropping revelation after another, most of them astonishing, all of them fascinating. It’s true without question, which seems obvious as you’re reading, and it’s very well written — a joy to read.”―Elizabeth Marshall Thomas, author of The Harmless People

So it is about human societies in the context of societies in the animal kingdom (NATURE). And it may show the way how to RE-connect to Nature and eachother using Synergy from #Synthecracy !

See ABOUT on TheConnectivist.wordpress.com
View all posts by broodjejaap →
This entry was posted in societies, swarms, Uncategorized. Bookmark the permalink.